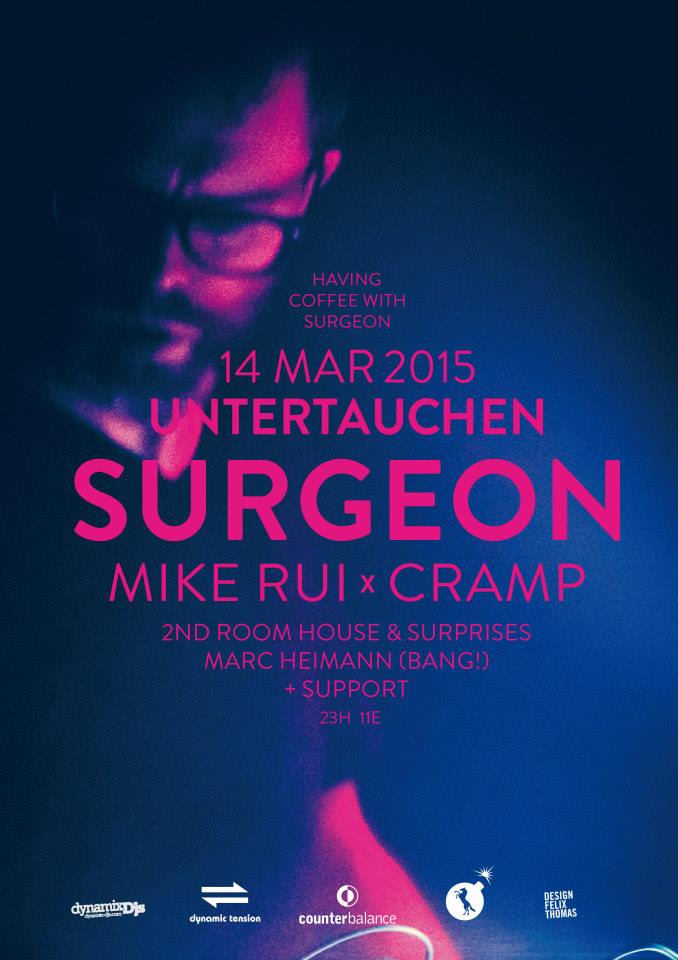 Let’s have another coffee with Tony Surgeon.

>>> From my perspective I want to create a transformative experience with music. I want people to step outside themselves, and see the world in a different way, to open their minds to consider something in a way that they hadn’t before. <<<
_______
Surgeon

James Manning travels to Birmingham to meet with Anthony “Surgeon” Child in the company of his spiritual advisor Lady Starlight.

On Malvern Hill overlooking Birmingham and the greater West Midlands I sat next to Lady Starlight, Doris and Anthony Child. Led puffing up a lofty trail to a grassy vantage point that revealed a panoramic, 360 degree bird’s eye view of the UK’s ‘second city’ and a rolling Welsh countryside, I hung out with the Surgeons, drinking rooibos tea, eating biscuits and talking about techno.

The Child’s drive an electric powered BMW with a reverse navigation system from the future, and winding up the summit to where this interview took place I mentioned the old Cadbury factory I saw somewhere near Bromsgrove. Still a good place for chocolate apparently. If we were all talking, names of surrounding neighbourhoods or unfortunate word placements of others were made to sound like sick fetish puns. I was told about mid-‘90s record stores in Japan dedicating shelves to the music of Jeff Mills’s Live In The Liquid Room CD, whom Surgeon featured, and besides the toilet humour it felt like a pretty clean way to get to the top.

Surgeon ‘shocked’ parts of the world only a week or two later by taking the stage in Paris to perform a live set of modular techno in support of Lady Gaga. Dressed casually in jeans, laced shoes and a worn Coil band t-shirt brandishing the phrase ‘constant shallowness leads to evil’, Child, introduced by Chew Fu collaborator Breedlove, entered the huge Bercy arena hooked in the arm of the bold red suit, make up and fringe of Lady Starlight.

Anthony Child has been releasing music for 20 years and his enthusiasm for techno comes across strong as ever. “I was talking to Lady Starlight about it last night,” Child says, “it’s like on this very basic level, being a DJ, I hear music that is exciting and I really want to share it with people.” Child continues, “it’s not about me being some stupid Muppet on stage or whatever, I’m just like, this is amazing, I want to share it with people…and blow their heads off.”

Surgeon’s bombastic productions and DJing style make Child the revered artist he is and for the UK he’s as canonical to electronic music as what the likes of Robert Hood and Jeff Mills are to the US. He runs two labels set up almost entirely for his own output, Counterbalance and Dynamic Tension, formed British Murder Boys with Karl O’Connor, is Trade with Blawan, helped define ‘90s Tresor, and has and will be a constant source of inspiration for music makers and DJs everywhere.

For almost two years Child has held down his own radio show for London broadcaster Rinse FM and dedicates this new found platform to showcasing the fresh, unreleased and unsigned music that comes his way. “I’ve never done a regular radio show, barely any radio,” Child says. “I’ve never really done anything where I’ve had to talk on the mic and announce and introduce, so it really came at a time when I was looking for something new.”

Radio is a new route Child is exploring to breach his comfort zone and feels it’s a new outlet to connect with music fans, and their feline friends. “This fun and really absurdist thing on the show is where people ask me to say hello to their cats, so I say hi to Mr Tibby in Stoke Newington or something like that,” Child humours. “I also give posthumous shout outs to dead cats, it’s another really nice way to connect, somehow.”

“I’m pretty much mixing it end to end,” Child explains of the way music is played on his show. “I’m not really hacking it to pieces like …..