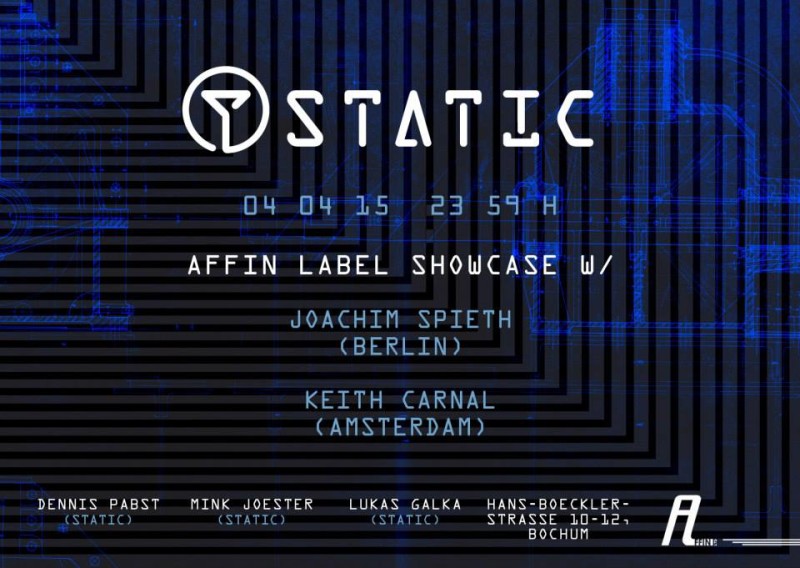 Affin was launched in January 2008 by Joachim Spieth, started as open playground for Techno/House. Since 2013 it focussed on releasing techno only.

JOACHIM SPIETH is a long time DJ, producer and label boss of Affin. Whether through the music he produces himself, or the productions he releases on his own imprint, the sounds always operate in their own little pockets away from the norm. It all started with ‘Abi 99’ – one of the earliest 12”s Cologne stable Kompakt ever released. At the time it was supported by legendary UK radio DJ John Peel and, in turn, was followed up with more huge early success in the form of ‘Under Pressure’, a split single EP on Speicher with Michael Mayer.

In the years since, there have been tracks licensed to The Orb’s Back to Mine compilation, appearances on labels like Traum Schallplatten and Paso Music and a steady stream of remixes for the likes of Michael Mayer, Einmusik and Maxime Dangles all of which have blurred the lines between techno and house music in the producers own unique way. Chief amongst Spieth’s achievements are those of his wide-ranging label, Affin. As well as hosting a regular radio show of the same name on Proton and label nights at clubs across Europe, the imprint has clocked up 150 releases, and has championed music from artists like Arnaud Le Texier, Samuel L Session, Reggy van Oers, Alex Bau, Roberto, Keith Carnal and so many more. It’s no wonder, then, that revered contemporary DJs like Ben Klock, Adam Beyer and Dave Clark regularly include Affin records in their sets.

Spieth himself plays a range of top European clubs on a regular basis, impressing crowds at respected venues like Culture Box (Denmark), Tresor (Berlin), Hive Zurich (Switzerland), Kater Holzig (Berlin), and many other European hotspots with his deft blend of groove, melody and atmosphere.

His vinyl EP release ‘Sensual’ might just be his greatest to date, with the likes of Scuba playing it in his Essential Mix, Depeche Mode’s Martin L Gore (a pop hero for Spieth) charting it on Beatport, Juan Atkins dropping it during his live Beatport stream and many other accolades across the board.

As well as that, Joachim released ‘Dark Matter’ 12“ with remixes from G-Man aka Gez Varley (ex-LFO) and D. Diggler followed by ‘Aidan’ vinyl EP in spring 2014. After a decade in the game, then, Joachim Spieth is a true pillar of the electronic community.

KEITH CARNAL is a household name in the Amsterdam techno scene, igniting parties across the city with his uniquely blended style of Dutch, German, and Swedish techno.

Born and raised in the north of the Netherlands, Keith grew up consuming music – his parents filled the house with tracks from New Order, the Dire Straits, and Donna Summer – and as a teenager, he spent hours exploring new artists in record stores.

In 2008, Keith burst onto the scene playing and producing house and electro music, releasing tracks on labels such as Hotfingers, Suara and Starlight Music. Later, inspired by Joseph Capriati, Ben Klock, Chris Liebling, Adam Beyer and Ben Sims, he discovered his true passion and style: techno. His techno tracks have since been played by Nihad Tule, Invite, Piatto, Klaudia Gawlas, Phunk Investigation, and many others.

Constantly innovating, Keith is now producing deeper techno, transporting crowds to a place where time doesn’t matter. He plays at parties such as the Harry Klein Night @ ADE, CLR Night @ Studio80. He has spun alongside Joel Mull, Surgeon, Chris Liebing, Psyk, Christian Smith and Jonas Kopp. As featured member of the I amtechno Showcase, he performs frequently on behalf of this organization.

Recently, Keith has been bringing his sound to Studio80 (Amsterdam), Amsterdam Studios, Club Berns (Sweden) and in the next few months you can enjoy his live performances at more leading venues worldwide. To hear his latest sets and for sneak peeks, check out his Soundcloud and Beatport.